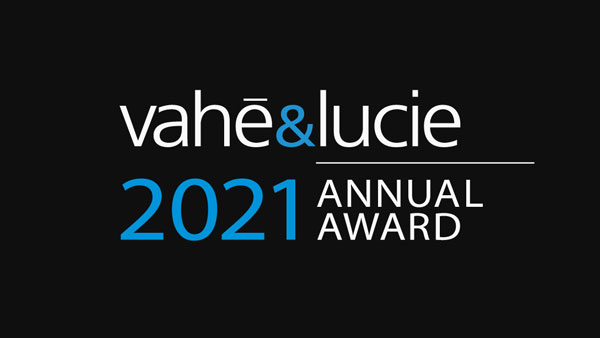 TUMO is pleased to announce the fourth annual Vahé & Lucie Awards! Geared towards sparking creativity and innovation, the competition is open to TUMO students and alumni in five different categories: Arts, Technology, Music, Film and Photography.

Submissions to the competition will be judged on creativity, innovation, technical achievement and skill level. The deciding jury will be comprised of TUMO staff, students, category experts and award winners from 2019.

There will be first, second and third place winners in each category with prizes of:

Submissions to the competition will be judged on creativity, innovation, technical achievement and skill level. The deciding jury will be comprised of TUMO staff, category experts and award winners from previous years.

About Vahé and Lucie Fattal

The Vahé & Lucie Annual Awards encourages TUMO students and alumni to innovate and make strides in their fields. The program was launched by Vahé Fattal in 2018 to honor his late wife, Lucie. Since then, Vahé has also passed away, and the competition is now dedicated to both of their memories. On behalf of all TUMO students, alumni and staff, we are tremendously grateful to the Fattals for their vision and generosity.

Vahé was an artist and graphic designer who studied at the National School of Fine Arts in Paris. After working as an art director for major firms in Los Angeles, he established his own design and advertising agency. Its creative services included corporate identity and communications, advertising and marketing, motion picture and television campaigns, and motion graphics and branding. The agency’s clients included the “Big Five” Hollywood movie studios, National Geographic, Nissan, UCLA Extension and First Interstate Bank. For 18 years, Vahé’s firm was also ABC Television’s exclusive advertising agency.

Lucie graduated from the University of California, Los Angeles (UCLA) with a master’s degree in philosophy and French literature. She went on to take intensive French Language and Civilization Courses (CCFS) at the Sorbonne University in Paris. Vahé and Lucie met, lived and were married in Paris. They later settled in Los Angeles, where Lucie taught French before founding a travel agency in Beverly Hills. Her agency organized personalized international travel & accommodation services for the art world, the entertainment industry as well as corporate businesses.

Throughout his life, Vahé was creatively involved in advancing Armenian causes and projects. He designed the raised-first Karabakh symbol and posters (1988) and the flag of Karabakh (1998). He helped establish the Golden Apricot International Film Festival (2004) and designed its visual identity. Vahé also designed the “Make it Happen” advertising campaign (2004) for the Armenia Fund Telethon and was the art director for AIM/Armenian International Magazine (1990-1992).

Vahé and Lucie shared a commitment to and passion for all things Armenian, education, the arts and exploring the world.