Hayk Kocharyan was one of TUMO’s first students. Now 22-years old, he recalls his two years at TUMO Yerevan fondly ⁠— where he learned the basics of game development, programming and participated in a public speaking workshop with TEDx. In no time, he went from student to learning coach to infodesk coordinator, and eventually, landed a spot on TUMO’s Product Development team.

“In my spare time, I helped the developers find bugs. I loved the work and got so good at it, that once there was an opening on the team they asked me to fill it,” recalled Hayk, enthusiastically. Eight months later, he graduated from college and planned on pursuing a master’s degree. His GPA wasn’t high enough to make the cut. “I was disappointed at the time, but now I know it was for the best. I do more important work here,” said Hayk, who went directly into the military instead. 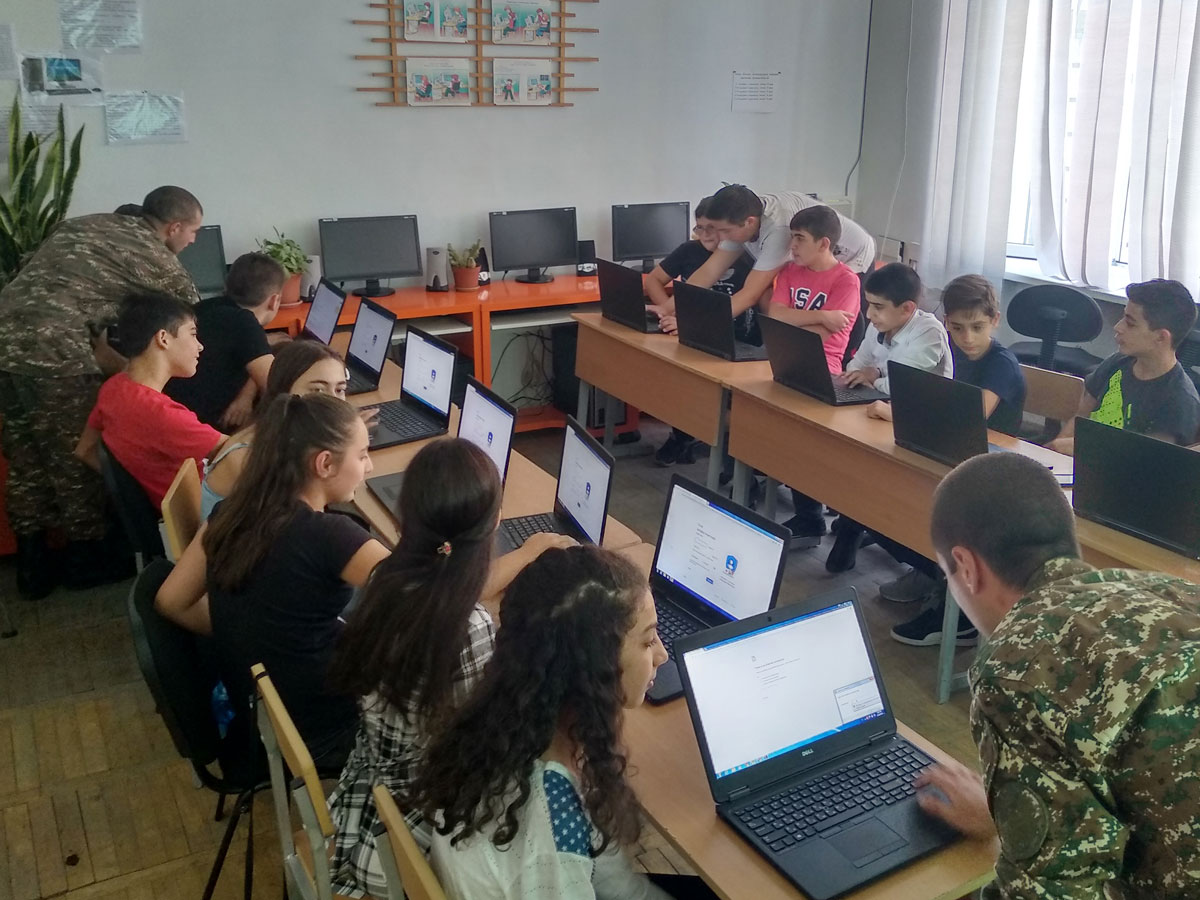 Upon joining the army and being assigned to a base in the municipality of Agarak in Syunik Province, Hayk began thinking about how to extend the opportunities that he received at TUMO to local students. Fortuitously, he met two developers, David and Hovhannes, and together they started planning an educational program for local teens. “They’re very experienced. One of them studied in France,” said Hayk. “What’s interesting is that they’d both been thinking about starting a similar initiative.” In just a few weeks, their ten-page program proposal made its way up the chain of command and was approved.

Their program is open to eighth through twelfth graders in Agarak. Classes are held at the local school twice a week, which students attend voluntarily and for free. The program has two tracks — “Everything I Learned at TUMO,” covering Adobe Photoshop, SketchUp and Unity, and a year-long programming course introducing students to HTML, CSS, WordPress, Java Script, HTTP and Protocol. Students who excel in the regular coursework are invited to work on additional, hands-on projects. 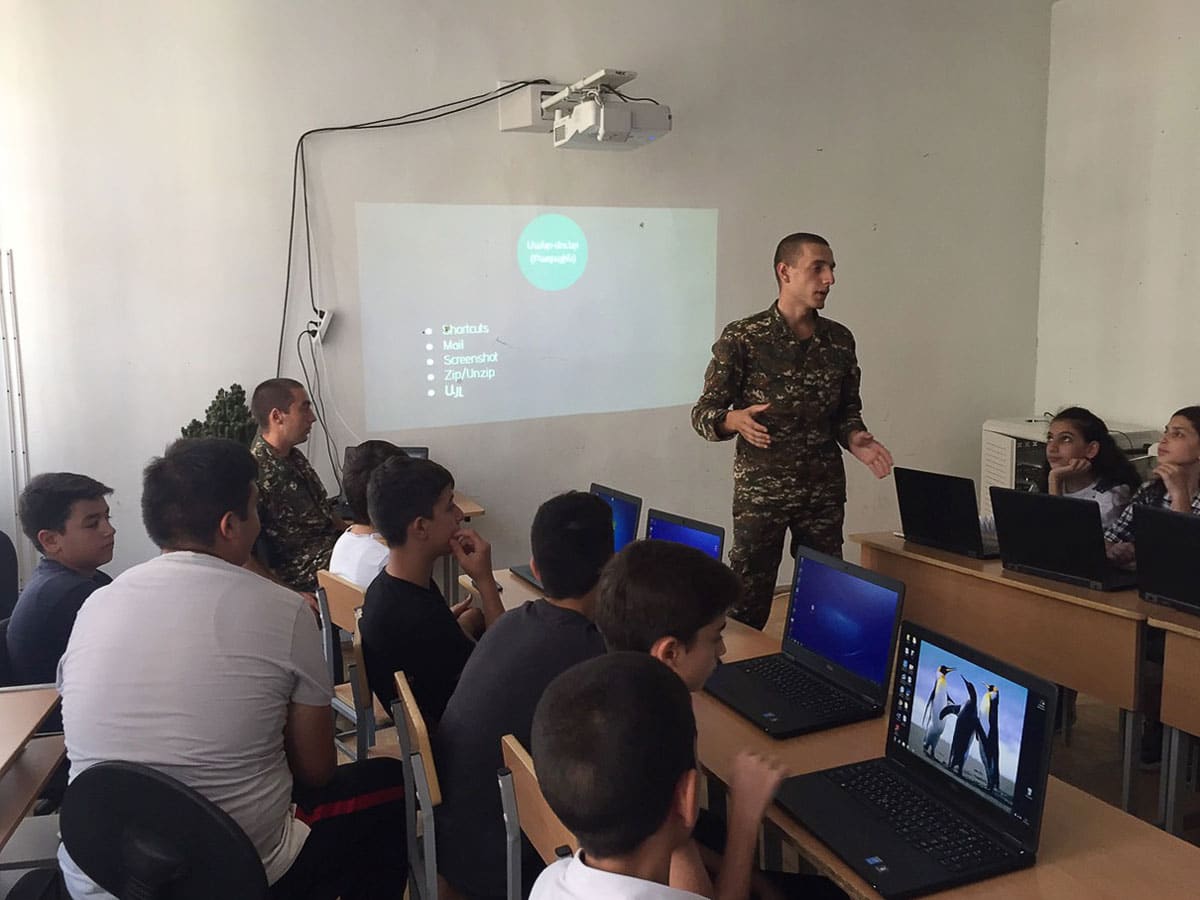 Hayk describes students as brimming with questions. Before class, they meet their instructors at the local military base and walk them to the schoolhouse and back afterwards. Students use the extra time to pepper the trio with questions.

“Some of Armenia’s most talented young people are here in Agarak. If I were serving somewhere else, I might be saying that about another group of kids. But the young people here are really incredible and eager to learn,” said Hayk. “There’s Smbat who can solve a Rubik’s
Cube in 7 seconds and Levon, who I’m convinced will be a world-renowned programmer when he overcomes his shyness. Students attend our classes completely on their own initiative.” 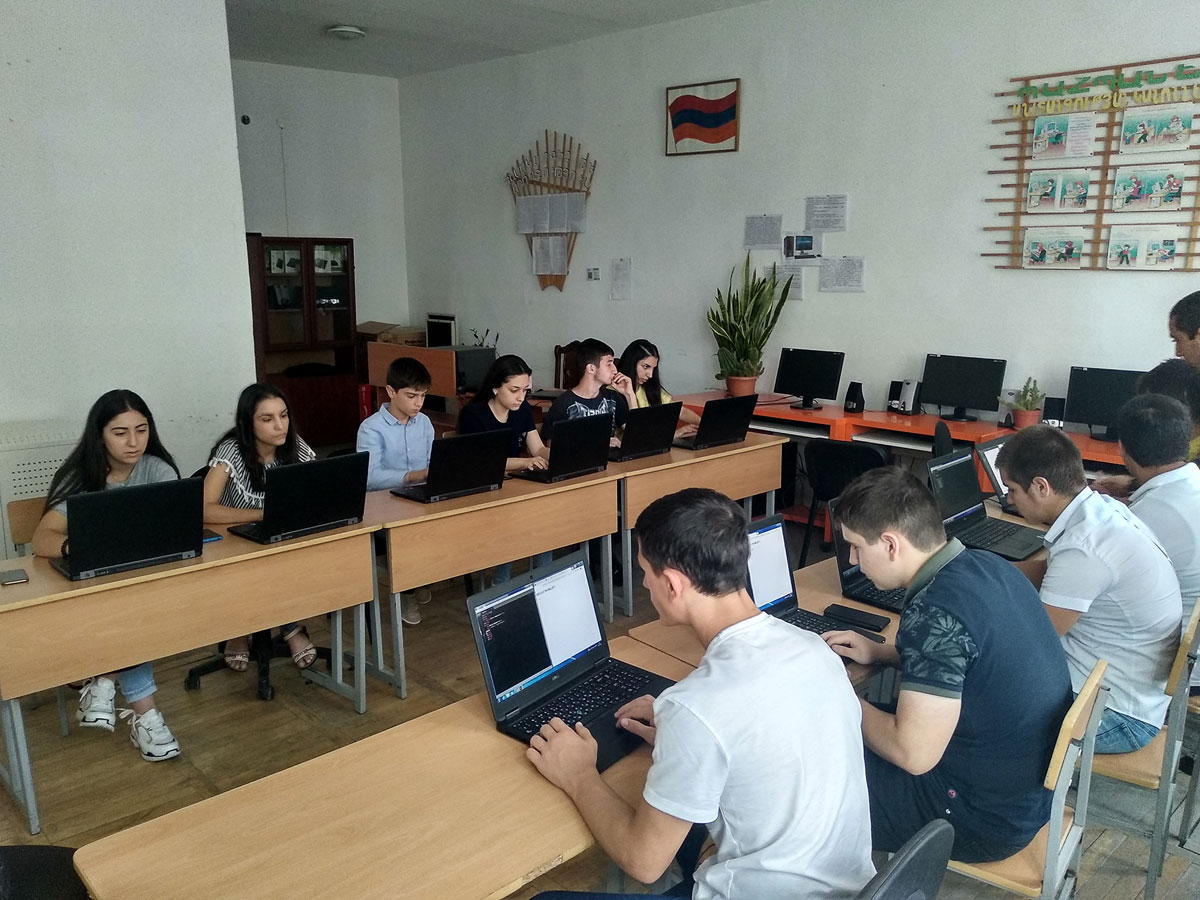 Hayk and his project partners want to do more than just transfer knowledge to the young people in Agarak. They want to empower students to take the development and branding of the region into their own hands. “This region is rich in fruit and natural beauty. Students can use their programming and web development skills to tell that story to the world,” said Hayk.

Eventually, the trio would like to take this program to every military base in Armenia. In addition to fulfilling their duties as servicemen, soldiers would learn new skills and be helpful to the communities they serve in. 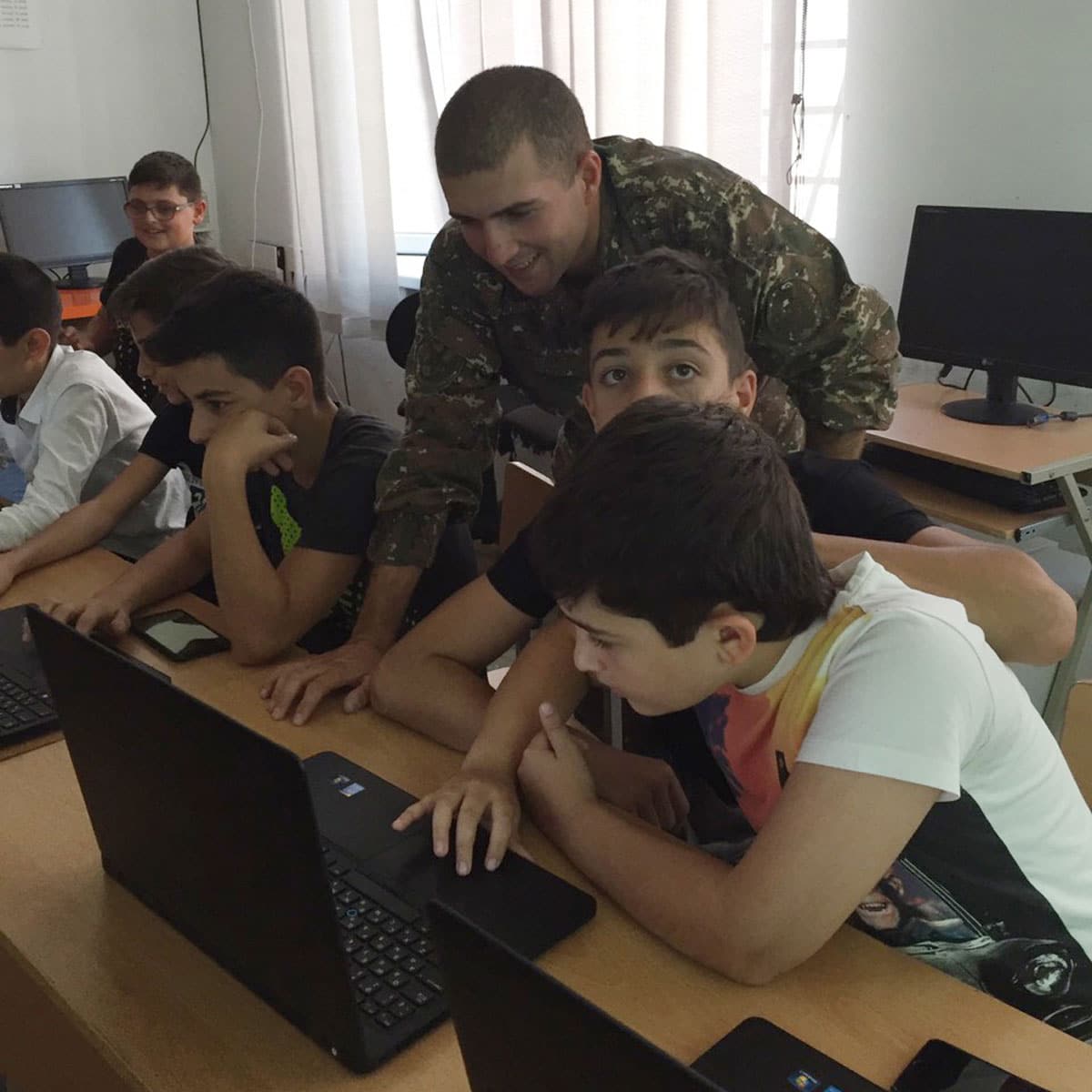 After completing his military service, Hayk plans to continue his education. He’s interested in artificial intelligence and information technology, the importance of which he discovered at TUMO and in the army. “I might even return to TUMO to fill the few jobs I haven’t done yet,” he said with a chuckle. 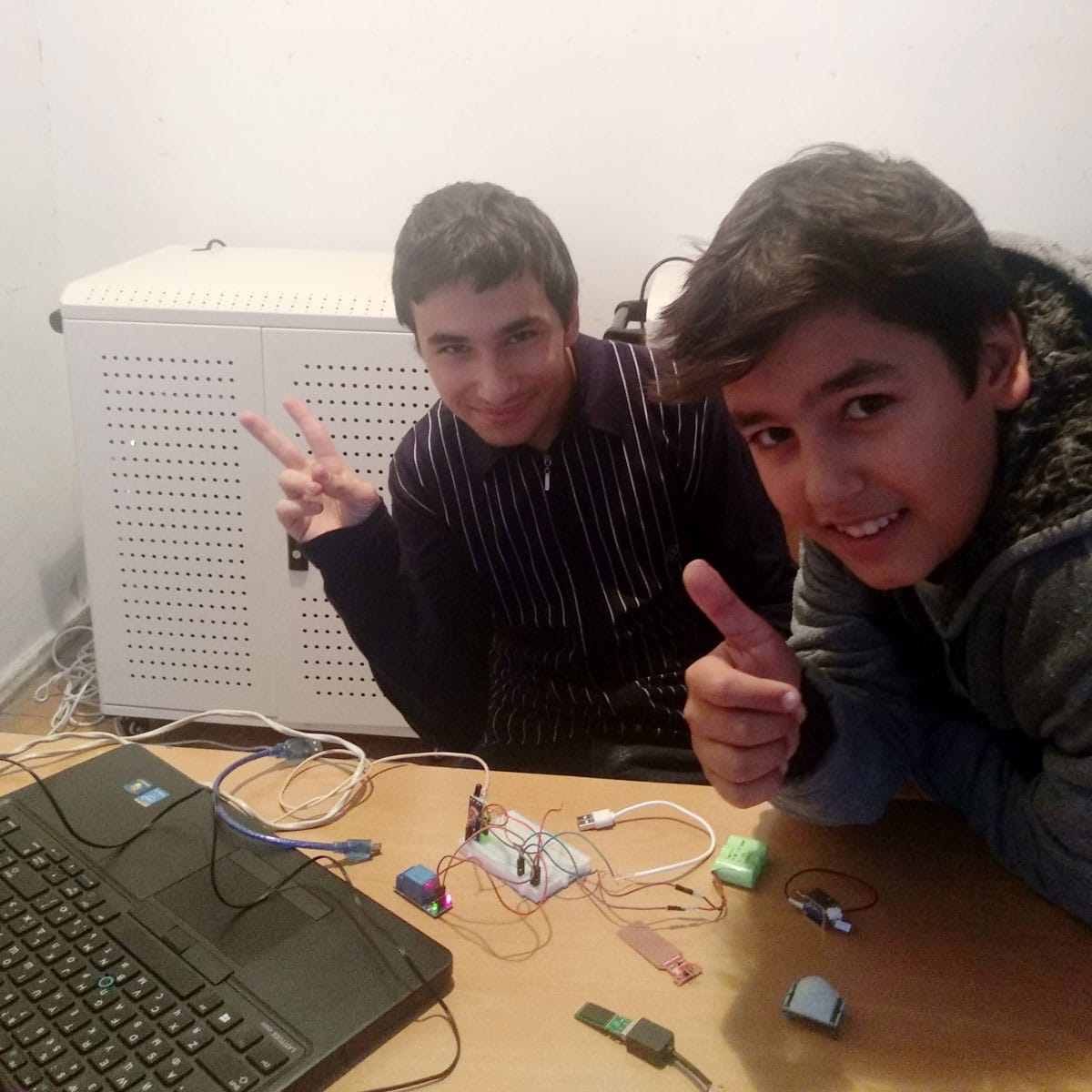